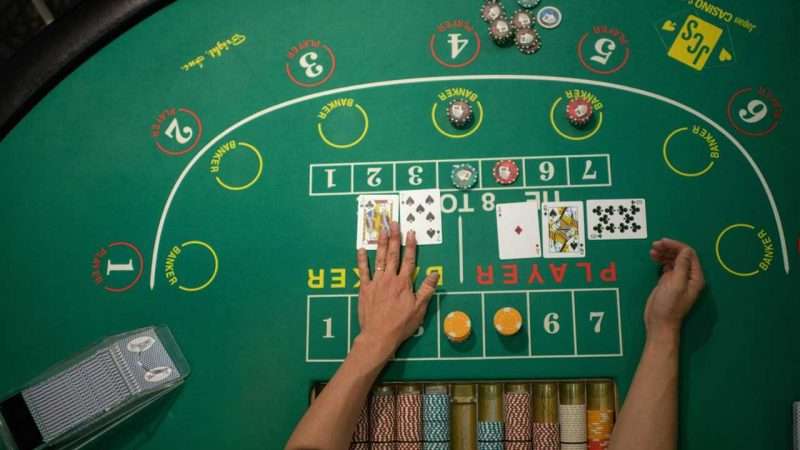 Baccarat is one of the best online casino games for players because the house edge is very small. It is one of the favourite games played in the Pacific Rim, especially in Macau, where bets are sometimes as high as $1,000,000. The game today is typically banked by the house, but players are neither playing against the house nor the other players.

Four to eight standard 52-card decks are used at Baccarat. No jokers or wild cards are used. Each card has its standard pip value – aces count as one, and 10’s and face cards count as zero. The name Baccarat may have originated from the Italian word baccara, which means “nothing.”

In North American casinos and most online casinos, the game of Baccarat is more accurately known as Punto Banco, where players are offered a chance to bet on either the “player” or the “banker” and may also make a third bet, the “tie.” In this game, the cards drawn by the “player” spot and the “banker” spot dictate whether additional cards are drawn. Two other games that may be found are baccarat chemin de fer and baccarat banque, and in these versions, there is an option to draw, not a rule that must be followed.

Online Baccarat in Malaysia & Beyond

Playing Baccarat online is both simple and quick. You don’t need to do anything more than choosing your bet and your wager size. The software will take care of all the rest. Unlike online blackjack, the decks in the shoe are likely to be used completely before they are re-shuffled. As with land-based casinos, you can keep track of streaks of “player” and “banker” wins or how long it has been since a tie has occurred.

By far, the most popular way to play Baccarat online is by using a live dealer. 5 years ago, the majority of online Baccarat games in Malaysia and the rest of Asia were played using a standard automated flash game. Nowadays, thanks to massive advances in technology, players can now play Baccarat online using a real dealer based in either a casino or a special live dealer studio, setup specifically for broadcasting live casino games on the internet.

Using this setup, you can see the dealer shuffle and deal the cards in real-time, as well as placing bets and watching other people place bets on every hand. It is basically the exact same as playing in a casino, except that you are using your mouse to place the bets.

‘Punto Banco’ is one of the American variations of the popular Baccarat game. The object of this Baccarat variation is to choose which spot, the “player” or the “banker,” will end with the best hand total, 9 being the best. When the player bets on “player”, the dealer will settle all bets and wagers and decisions are made by the dealer based on a set of rules explained below. The house edge on the “player” wager is just 1.24%. When the player bets on “banker”, the dealer will again settle all bets and wagers and follow the set rules, but when the “banker” spot wins, the house charges a 5% commission. After factoring in the commission, the “banker” wager has an even smaller house edge of just 1.06%.

Wagers placed on “tie” are won if the “banker” and “player” end with the same point total. This bet is usually paid at 8 to 1 odds, for a house edge of 14.4%. When the payoff is 9 to 1, which is often found at online casino sites, the house edge is just 4%.

All decks of cards are shuffled together and placed in a shoe. A cut-card is placed 7-cards from the end of the decks and when play reaches the cut-card, it signals the last hand of the shoe. After all players have their wagers in place, the dealer will deal the game. The “player” and “banker” spots each receive a card, face-up, starting with the “player,” and then a second is delivered to each spot, again face-up.

If either spot has a total of 8 or 9 (a natural) the hand is over. The higher total wins. If both hands are naturals and tie, the “player” and “banker” hands push, no money is exchanged. However, any wagers on “tie” are winners. For any other outcomes, the dealer must follow a set of rules. Players do not need to know the hit and stand rules, since the dealer handles all the action. However, it is good to know what to expect.

Get started with our curated list of trusted gaming websites today!

The Biggest Bubble in Poker History Bursts of Triton Million

WSOP moving to Bally’s and Paris Las Vegas in 2022